The Tooth-Shattering History of Mouthguards 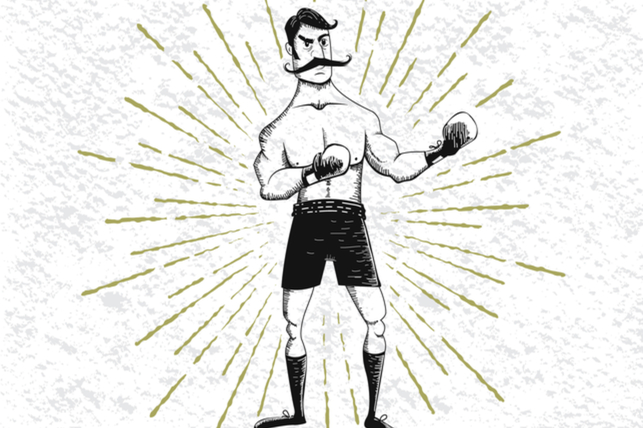 We didn’t always have mouthguards to protect our teeth during high impact sports. But, like most inventions, mouthguards were created out of necessity. In fact, one pugilistic sport is responsible for getting mouthguards off the ground, and helping other protect their teeth in times of peril. Below, we’ll discuss how boxers were tired of cracking their teeth, and decided to protect their mouths in unlikely ways.

The exact origin of the mouthguard isn’t completely clear, but historians have credited its creation to boxers in the late 1800’s. To protect their teeth, boxers would bite down on pieces of wood, sponges, wool or tape to protect their teeth from rattling against each other. These early mouthguards worked to a degree, but were problematic because boxers had to actively clench their teeth against them for them to be effective. This exhausted their jaws and made it difficult to focus on fighting. While these early mouthguards were a good start, there was much more work to be done to find a viable solution to broken teeth.

The first formal attempt at creating a mouthguard came in 1890, when a London dentist named Woolf Krause created his version, and called it the “gum shield.” Krause’s gum shield was made from gutta-percha latex, which is a rigid, rubber like substance made from the sap of Palaquium trees. Woolf’s gum shields were intended to protect boxers from lip lacerations, and they worked quite well in that regard. However, they still had to be held in place by clenched jaws, and they were only usable once, which made buying them inconvenient.

The Boxer Son of the London Dentist

Woolf Krause’s son, Philip Krause, took his father’s design and made it reusable. Philip was an avid boxer himself, and constructed his gum shield out of vella rubber, which is more pliable than percha latex. Philip’s gum shield worked very well for him, and his fellow boxers. In fact, it performed so well that it made its professional debut in a widely publicized professional bout in Jack Britton V. Ted Lewis, which took place in 1921. The gum shield worked so well for Lewis, that Britton’s manager successfully argued that it gave Lewis an unfair advantage. This led to a decline in gum shield’s popularity, which wouldn’t recover until 1927, when a boxing match between Mike McTigue and Jack Sharke had to be cut short because McTigue severely cut his lip on a fractured tooth.

Like boxers, football players face a lot of high-impact collisions that can cause facial injuries and damage teeth. During the 1940’s, dental injuries accounted for nearly half of all injuries suffered in football. So, in 1947, Los Angeles dentist Rodney Lundquist invented a new technique to create better mouthguards. Lundquist used transparent acrylic resin to form an acrylic splint. These new mouthguards were molded to perfectly fit the upper and lower teeth, which made them less obtrusive and protected teeth much better than biting down on a piece of rubber. The first professional athlete to use Lundquist’s mouthguard was San Francisco 49er’s quarterback Frankie Albert, in 1948.

The American Dental Association began promoting the benefits of mouthguards during the 1950’s, and formally recommended using them for all contact sports during the 1960’s. By 1962, all high school football players were required to wear mouthguards. Now, the ADA advises that mouthguards be used in 29 different sports.

Today, mouthguards come in a variety of shapes, sizes and prices. If your child is playing sports, then it’s important that they protect their teeth. Check with their league or school to see if your child needs to be wearing a mouthguard for their sport. Schedule an appointment with our office to learn more about mouthguards, and how to protect your child’s teeth from injury.

← How did Native Americans and Pilgrims Care for Their Teeth? Here’s How Your Child Should be Flossing →