How did Native Americans and Pilgrims Care for Their Teeth? 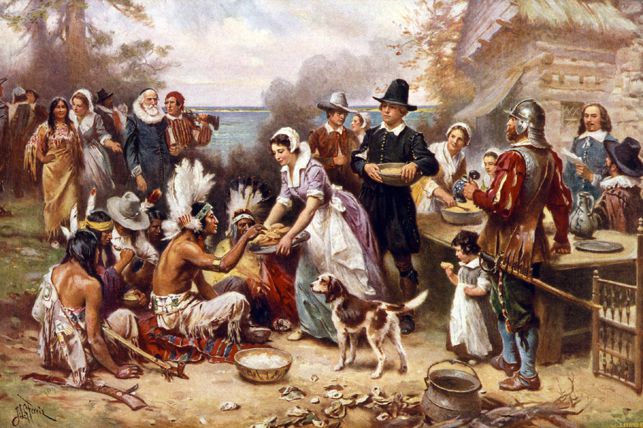 As Thanksgiving approaches, we look back to the discovery of the new world and observe how two cultures came together to share in their humanity and celebrate the harvest over a great feast. We know about the meal – but what about the clean up? Did the Native Americans or pilgrims take care of their teeth? They did, and here’s how.

The Native Americans were expert hunters and gatherers, and were able to subsist completely off of the land. Their diet consisted mostly of corn (maize), beans, squash, fish and game. They would eat this food largely unaltered by spices that were more prominent in Europe. They also ate a lot of fresh fruit and nuts, which help to keep plaque off of teeth! Because of their fresh diet that was high in fiber, Native Americans had surprisingly well-maintained teeth and gums.

Native Americans cleaned their teeth by using chewsticks and chewing on fresh herbs to cleanse their teeth and gums. Chewsticks were twigs that had two uses: one end was frayed by a rock and used for brushing, while the other end was sharpened and used as a tooth pick. Native Americans would chew on the frayed end to clean debris from their teeth.

In addition to chewsticks, early Native Americans would also chew on pine needles to clean debris from their teeth. They also chewed fresh herbs like sage, cucacua and mint to freshen their breath.

A Long Voyage and Preserved Food

The first pilgrims to colonize America were a completely different story. The Pilgrims’ journey from England to America took 66 days by ship. In order to survive the lengthy journey, they stocked their ships with preserved food like salted dried meat, dried fruit and hardtack – a dried biscuit that is very similar to a saltine cracker. All of these foods are terrible for teeth, particularly dried fruit and hardtack, which easily sticks to teeth and provides fuel to bad bacteria that cause cavities.

What the pilgrims drank on their voyage may have been even worse. Because water distillation was not perfected yet, sailors of the time didn’t drink a lot of water because it was unclean and could easily lead to sickness and death. This meant that the primary beverages on board were beer and wine. Wine is highly acidic and easily stains teeth. Without brushing and rinsing, excessive wine drinking can lead to tooth decay and cavities.

Despite the technological advances that Europeans had on Native Americans, toothbrushes were not widely produced and distributed until about a century after they came to America. The toothbrushes of their time were typically made with a bone handle and bristles were created from hog’s hair. Toothbrushes were also mostly used by upper class society, and not sailors. All of these factors add up to very unhealthy oral conditions for the sailors aboard the Mayflower bound for America.

When added all up, early Native Americans most likely had healthier teeth than the arriving pilgrims. Due to the lack of clean drinking water available to the pilgrims, and their reliance upon dried fruit and meat, they had no real way of cleaning harmful debris from their mouths.

We hope that you and your family have a safe Thanksgiving this year, and that you are able to enjoy some of your favorite holiday meals. Just remember to brush your teeth this holiday season, so you can avoid cavities and tooth decay!